The kind of the “second” section of our journey after KwazuNatal parks was the famous Kruger Park. It was first founded in 1898 and during the years it has grown to huge measures. Kruger is one of the biggest park in Africa, and it covers nearly 20 000 square kilometres. The distance from South to North is around 360 km and there is 850 km of tarred roads and some 1500 km of gravel roads. The speed limit on tar is 50 km/h and on gravel 30km/h, so you cannot expect to see the whole huge park on 6 days. There are 12 main rest camps in Kruger and besides these also 4 satellite camps and 5 Bush camps. In the main camps there is restaurant, shop and fuel stations, etc facilities, even mobile Internet worked time to time 🙂 Because Hans and Maud had visited Kruger many times before they had already their favourite camps. The problem was that we had lesser time to spend in Kruger that it would have needed to stay in all their favourites, so we needed to make picks. After pros and cons we chose 2 nights in Lower Sabie and 2 nights Satara (which are the 2 major ones of all the main camps), and to compare and to settle down a bit before heading back home 2 nights in one of the bush camps: Talamati, probably the smallest and cosiest of all camps.
When we entered to Park through Crocodile Bridge gate a car parked next to us and the lady came to us with a map in her hands asking if we are heading towards Lower Sabie. With lots of excitement in her voice she showed the map telling us: in that and that junction of these roads, there has been a Cheetah hanging around the whole morning. Oh boy but Kruger hit us even before we had checked in the park! For us it felt like it took at least 2 hours before we were able to drive on after the check in, but actually it was probably just 10 minutes. We were very eager to see cheetahs, of course. But then we realized that none of us didn’t pay close enough attention to the map and the junction she pointed out, so there was a little bit of frustration in the air while we seek a couple of potential gravel roads on our way and found those empty. Then Maud said,take the next to the right and we’ll see if we are finally  on the correct road. After a kilometre we saw it! A cheetah in the middle of the road! No other cars visible! Hans drove closer to the cat and we noticed that there are 2 sub-adult cubs resting the in the shadows, too! Since we were the first car at the spot we had a good position to take photos. Unfortunately, while more vehicles were entering the scene, the cats felt its time for them to move on through the bush. But then again, I couldn’t believe my luck, practically the 1st animal in Kruger park for me is of course! A cheetah with cups! 🙂 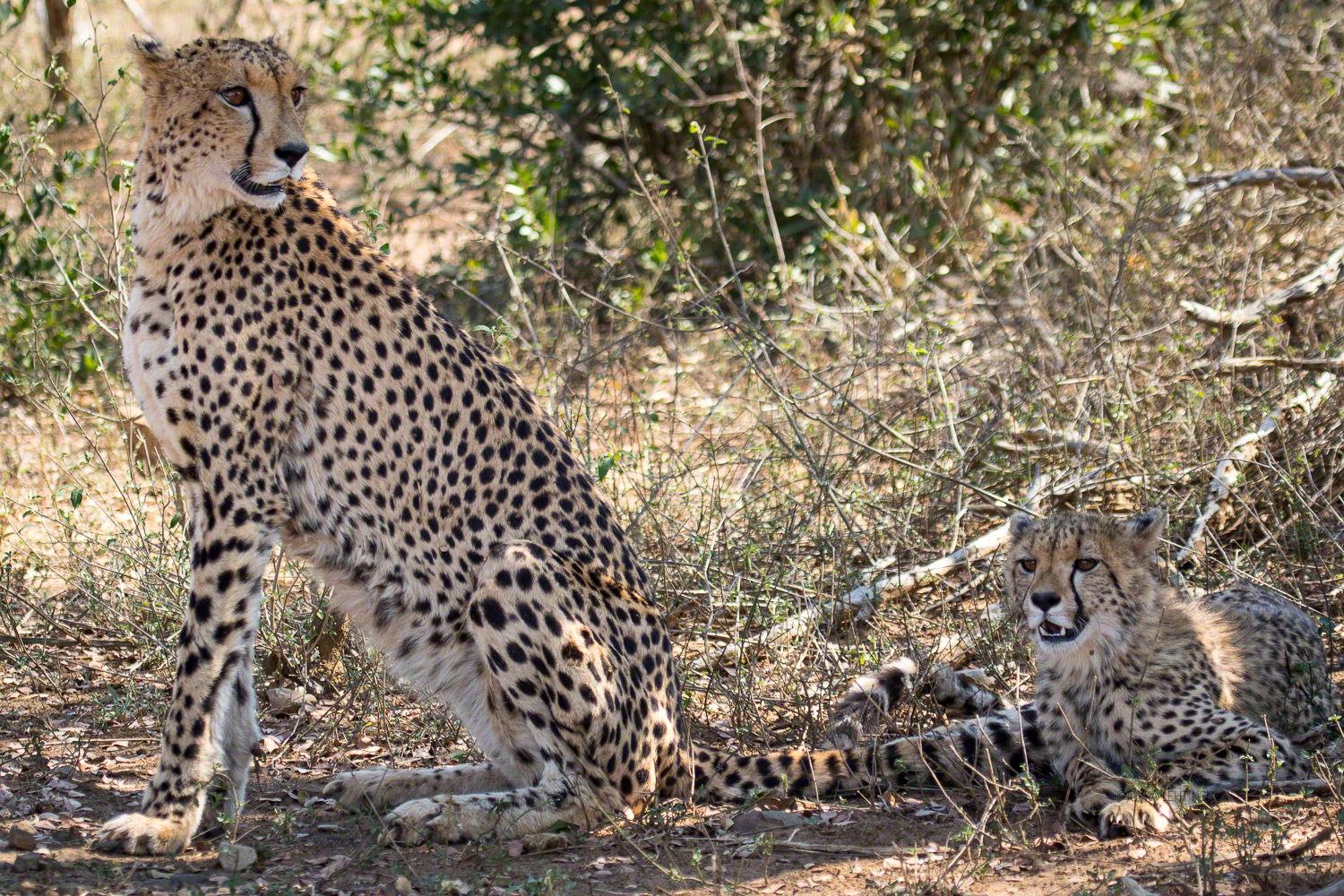 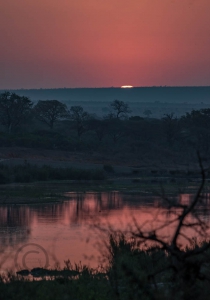 The accommodation Maud had chosen for us was once again excellent! We had two 2 bed bungalows with perimeter views next to each others. The sun rise from my deck looked like this… The camp is just a stone throw away the river, so it was great to hear hippos “talk” and look buffalos drink and enjoy the beach. The Mug’n’ Beans restaurant is located even closer to the water and build on top of wooden poles, there is also a large outdoor dining area and a terrace where we had lunches and dinners. Our days were more or less like copies of the previous days in the Natal parks: wake up call 05:15 am and the when the gate is open at 06am out the drove. We had a loose route plan for each day which allowed changes on the go if we felt so. The funny thing is that even if Sabie camp accommodated maybe about 100 groups (?? my wild guess!) (and as many vehicles, too) and the most are out, say in 15 minutes the gate opens, there is still no, or just little  traffic after first 3 kilometre s away from the camp. There are so many different roads and routes to take that people just kind of disappear in the “bush”. We so well experienced this on both Sabie morning drives. Especially the gravel roads are very quiet in terms of traffic. When we left the camp sun had just risen above the hoziron, but in just 10 minutes after, pretty thick fog started to take over the scenery. The sun was there somewhere behind, but horizontal view was limited to less than 50 metres. We were on dirt road and  suddenly a herd of elephants broke through the fog crossing the road ahead of us. Again that large majestic animal  made us feel goosebumps, silently and slowly walking and rising from the fog and then just a few meters away the from road the fog swallowed them again. 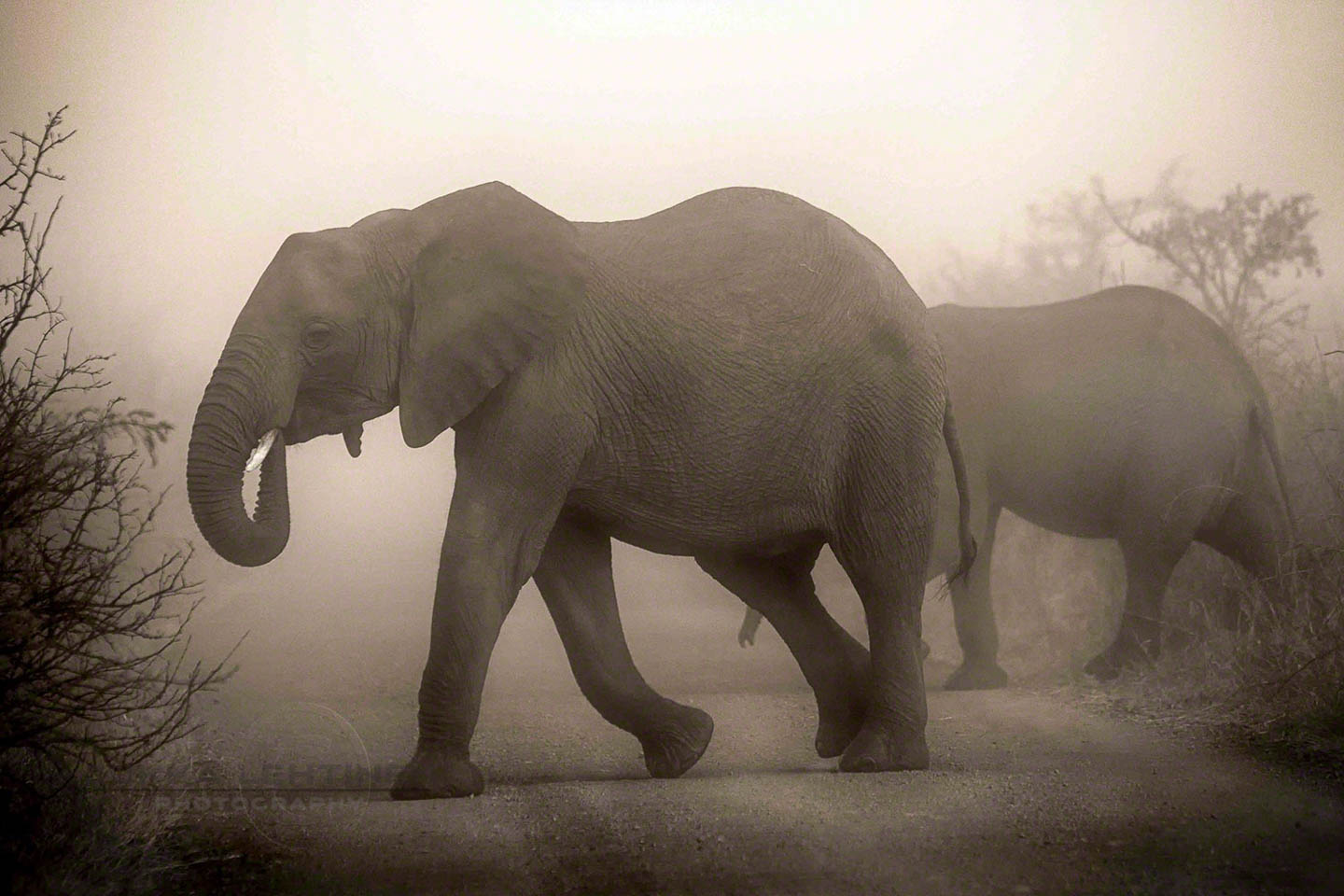 The fog was pretty persistent that morning, even the sun got higher minute by minute. When we had checked that the road is clear from ellies, we continued driving. Then we were literally caught by a huge  surprise! Behind a thick bush, just 2 meters away from the car was a lion couple laying lazy! It was so sudden that even if we were driving only slowly it took  meters before Hans was able to stop and reverse back.  Mr Lion gave us the look, and then they, like royals, stepped 15 meters further in the grass.  Since it seemed that they are not going to go nowhere we drove on after 20 minutes. We made a good loop and came back to the spot again.  And still no other cars, they were obviously hiding pretty dang well in the grass, cos, it took even us a second to find them, and we knew pretty exact were we saw them last. 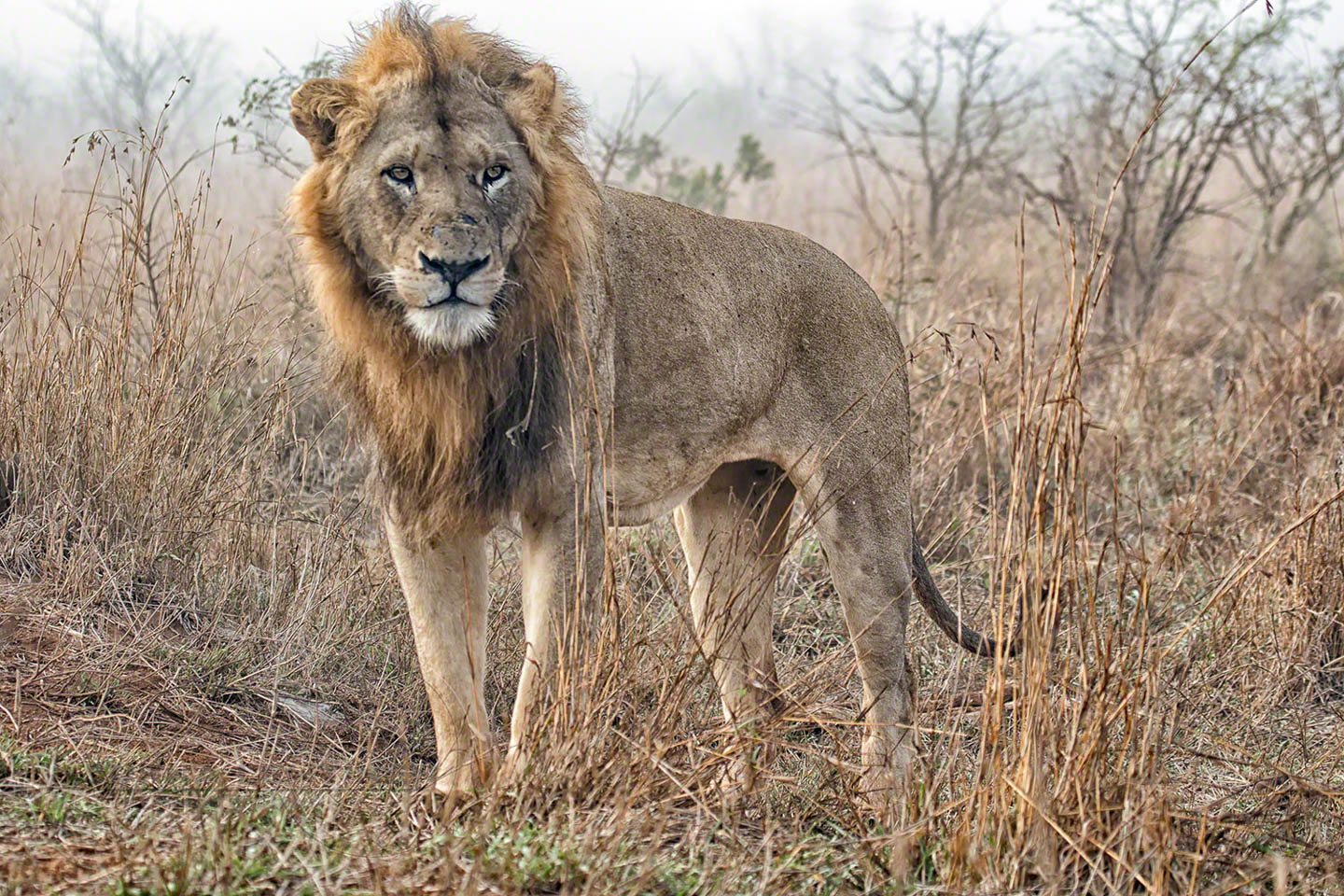 Obviously they had had thei breakfast already, but we felt hungry and drove to the picnic spot near by. When we are full of chef Hans’ fried eggs, beans, tomatoes and toast washed with juice, we head back to “our lions” . Now the fog was totally gone, sun was beating hard and there they were: laying 15 meter from road, 20 meters gap in between! I think that the lady had some attitude, she rose up, walked directly towards the male, turned her back to him, the tail sideways, and there we had it: Lions having fun in the sun! 🙂 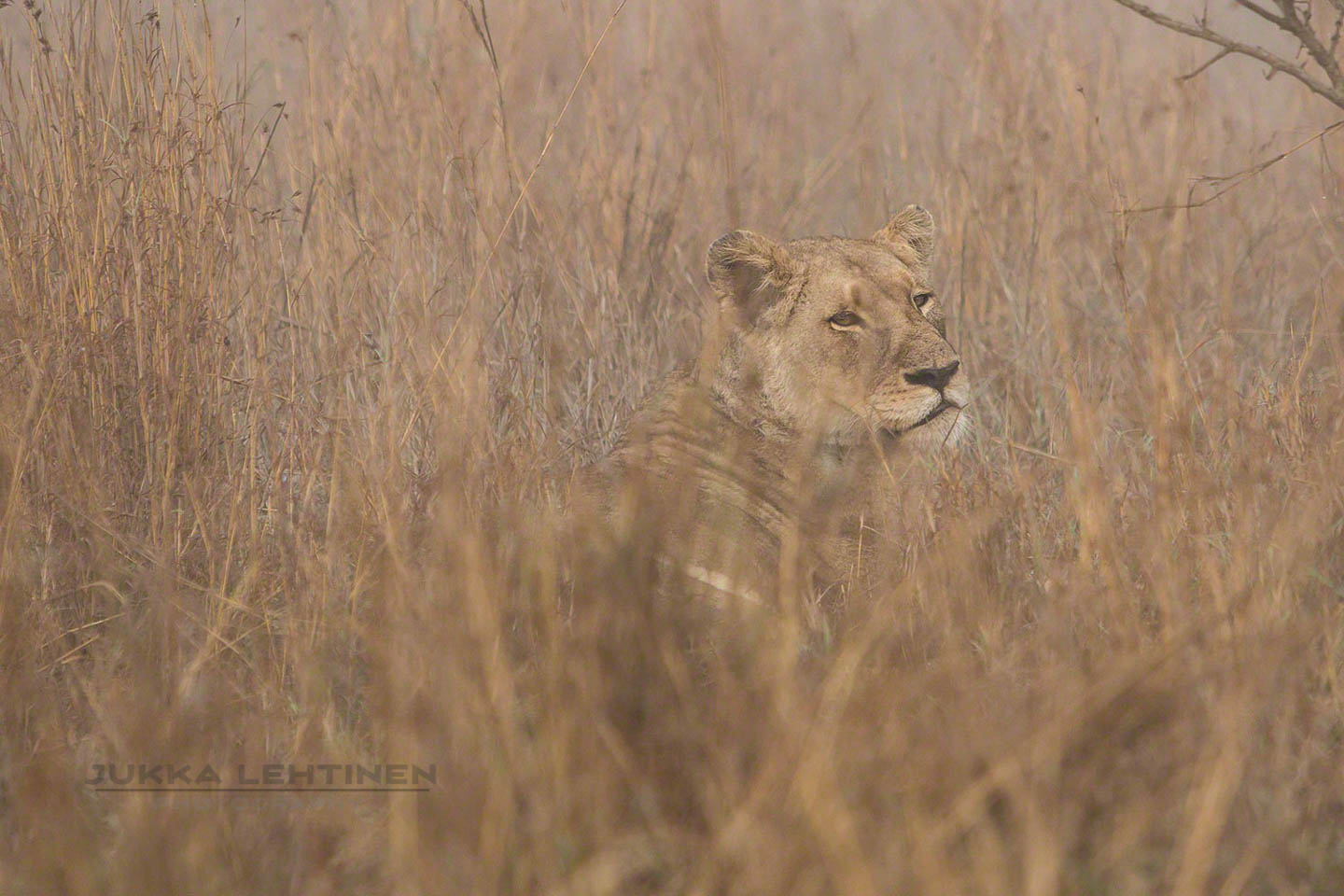 ANd here we thought, now we have seen it all… but how totally wrong we were…! – to be continued on the next post !