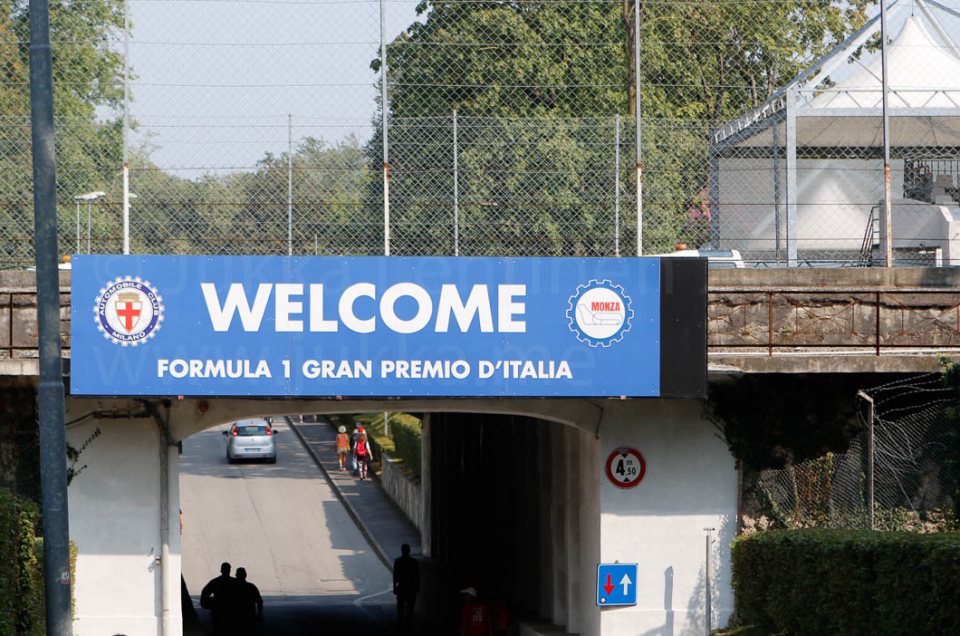 We are more interested in Italy, than in motor sports, but when speaking of Italy, motor sports and specially Ferrari is  a pretty obvious thing. We had had a long time plan to see one day the Italian Grand Prix in Monza. This Spring we thought that now its time to make it happen, so we booked the flights, hotel and 3-day tickets to Autodromo di Monza for the 1st weekend of September. We didn’t have much expectations  what to expect, but we thought just let it go. We arrived to the hotel in Bergamo Thursday 1PM and had arranged a taxi to Monza, so that we would take part of Pit Lane Walk which was announced to be between 4-6pm. Our driver Efrem was excellent local guide, living in the area, so we reached Monza well ahead, around 3:15pm. A short walk to circuit, and we found out what is the level of enthusiasm of Formula Ones in Italy. There were literally thousands of people ahead of us when we find the spot from where to enter the pitlane. It was a hot afternoon waiting and standing in the crowds, but finally the gates opened and people rushed, yes, rushed into the pitlane. Ferrari’s and Mercedes’ boxes were the furtherest ones and not surprisingly the most favourite ones, too. There was no way to reach closer than 50 meters from Ferraris but obviously I managed to take one shot of Kimi in it. 🙂 Not all the teams had their cars in the boxes yet, but we had a good time following the staffs doing their preparations and fixing the cars from close by.

On Friday morning we took the train from Bergamo to Lesmo and walked 3 minutes to the circuit, we thought that we were in about the time, but again there were many people who had already took their places along the race track. The area is pretty large and so are the grandstands, too, so we fit in well. Friday is a free practise day for the teams and they make 2 sessions during the day. I was a bit disappointed about the photography opportunities, it turned out that there is no change to shoot along the track, (without having the fence in between the lens and the car), to get a low angle view. Only chance was to climb up on the stands and try to shoot from the distance with a long lens.

We skipped Formulas on Saturday and went sightseeing in Bergamo, but on Sunday, the race day, we were on the move early. Which appeared to be a vice thing, because the train to Lesmo just didnt exist! We still have no idea why was that, but instead there was a non-stop bus transfer to the circuit from Monza railway station. The walking distance from the bus stop was more than we had expected to be, and at least now we found out that this is a huge event! It would be really nice to know how many people there were altogether, but many! We walked literally in a queue for nearly an hour before we reached our stand.  Before the race started there was a great display in the air. Italian Air Force made a really remarkable show with 9 fighters. Very talented pilots made e.g. a loop just above us, with a low ( I mean LOW) pass above our stand.

The opposite side of the track was a large TV screen, so we were all the time aware of the situation of the race. It was really handy to follow the screen first and then eye witness the cars thundering towards the first corner. Must admit that the performance of the cars ( and drivers, too) is quite impressive, when followed near the track.

Unfortunately in the race  Ferraris were not able to beat the AMG-Mercedes couple, but as Finn, it was nice to see Valtteri Bottas and Williams finish at 6th position and Kimi Räikkönen 4th. And as a Ferrari fan to see Ferrari on the podium with Sebastian Vettel third. 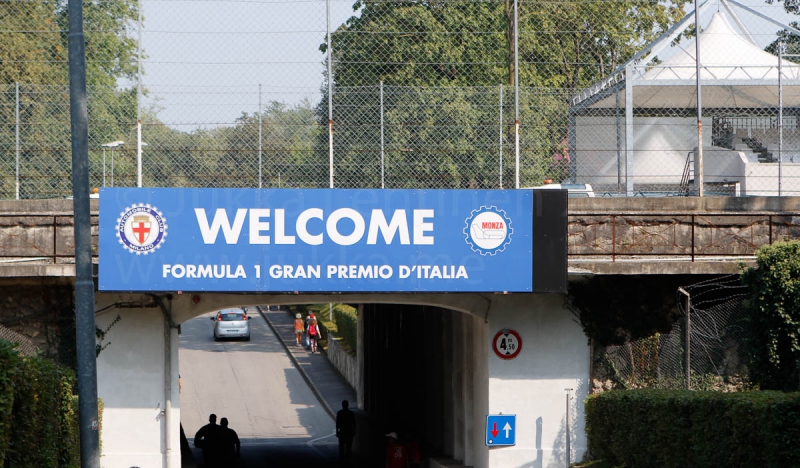 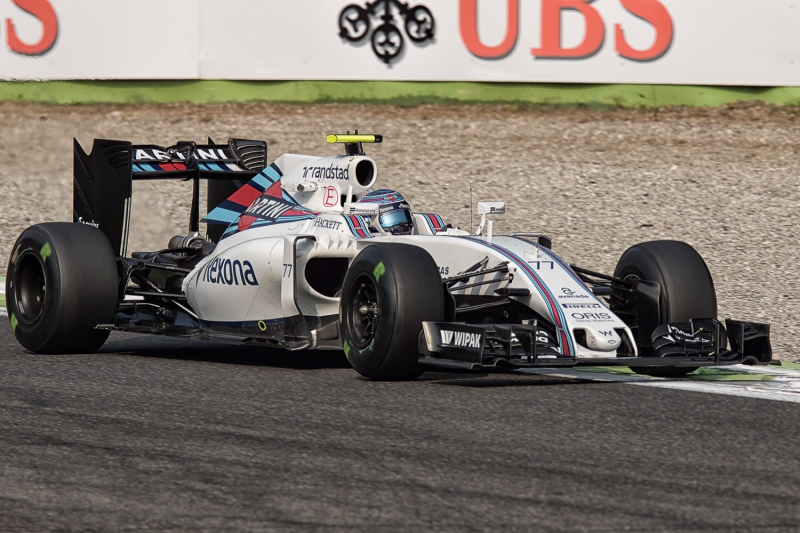 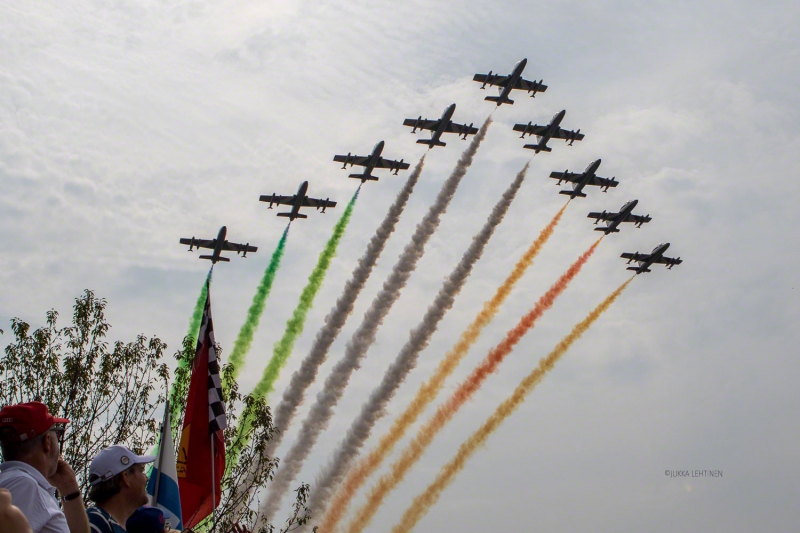 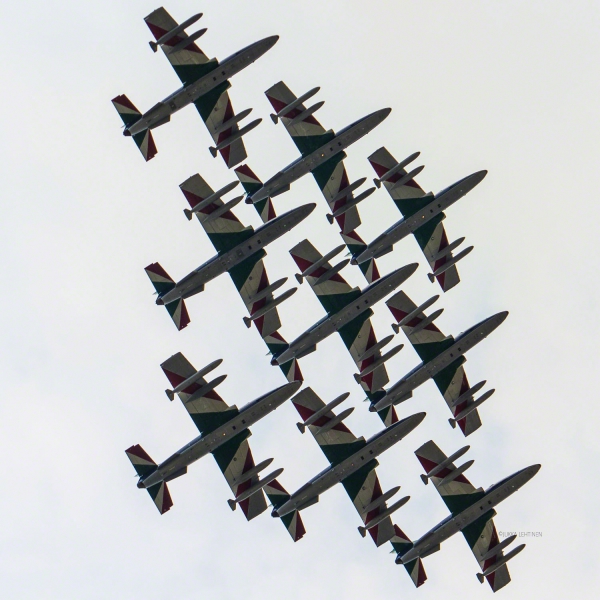 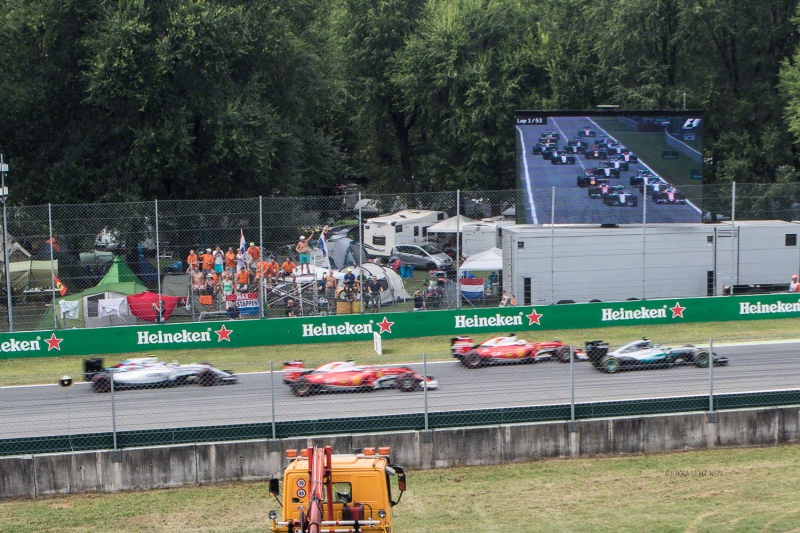 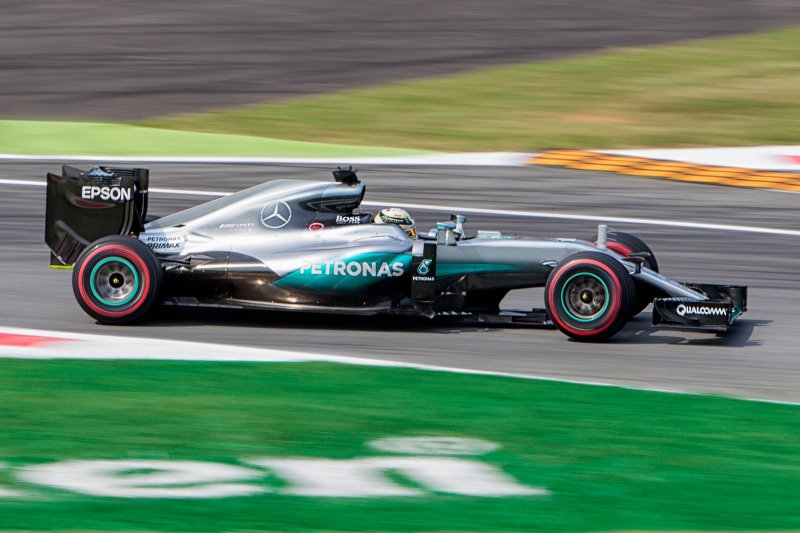 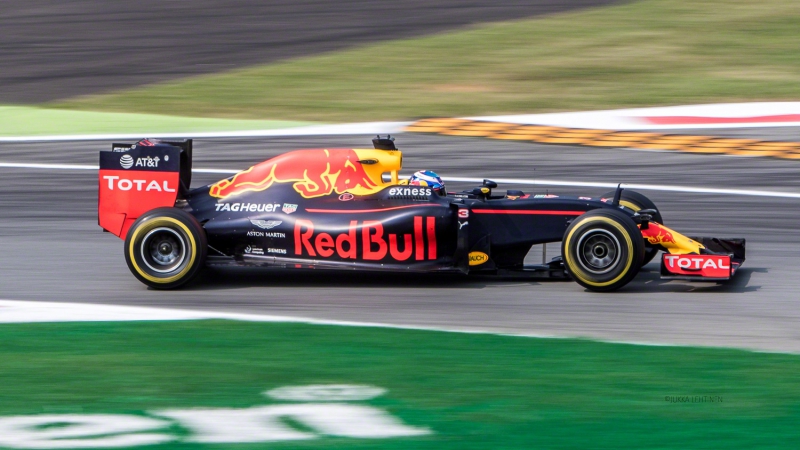 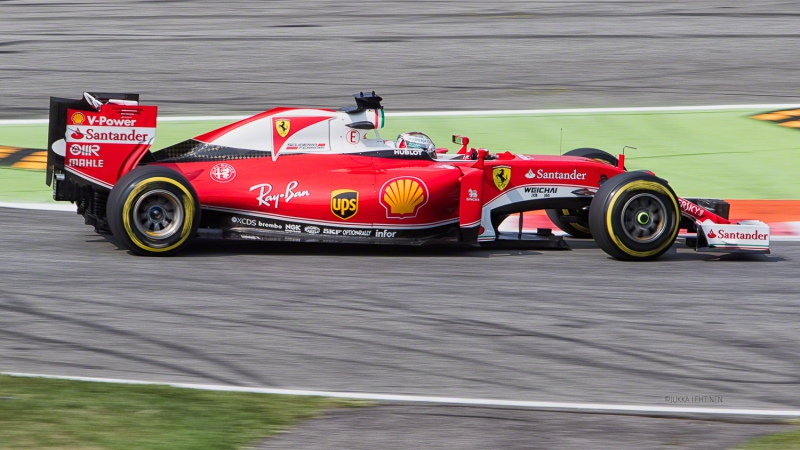 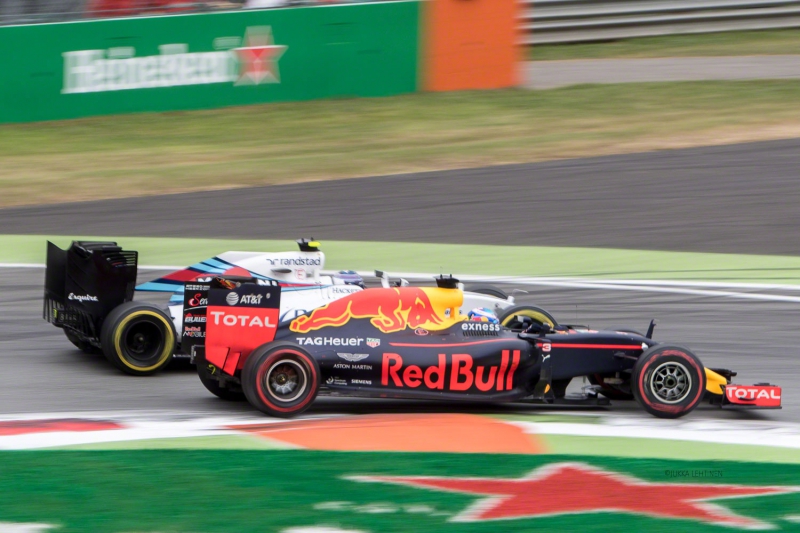 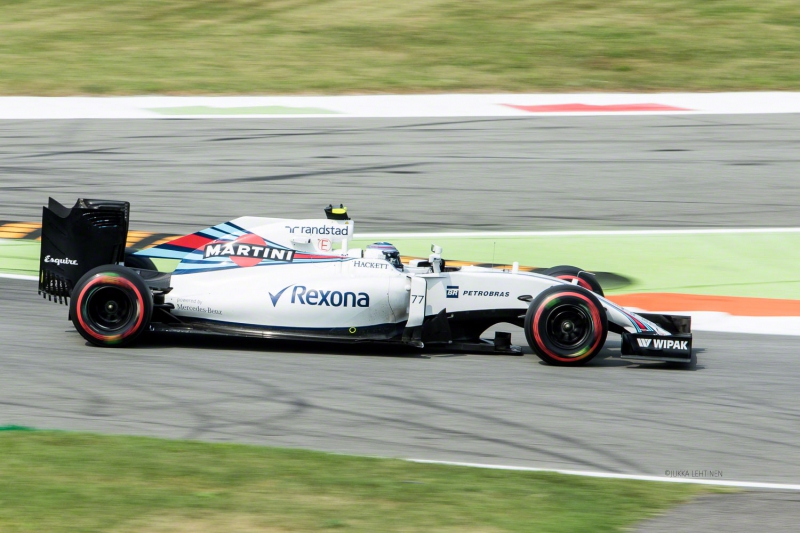 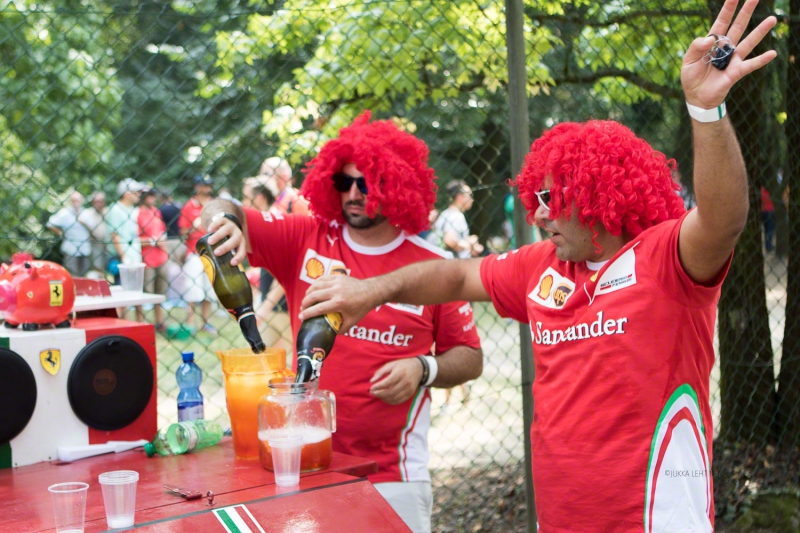 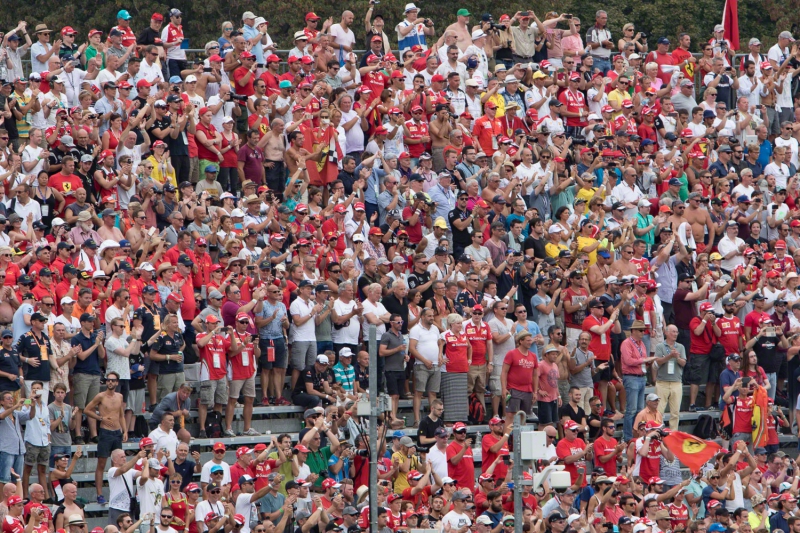