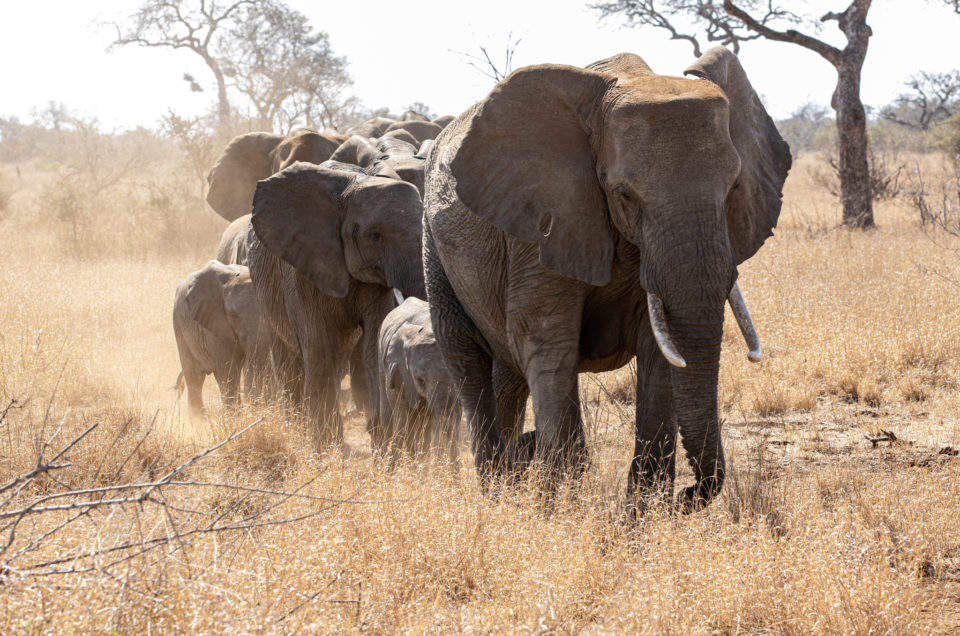 More images can be found on the gallery page https://jukka.me/galleries/kruger-park-images/

This was my second trip to South Africa and the first for my wife, Sari. I travelled with our Dutch friends Hans and Maud in 2015 and visited 3 national park, among Kruger Park. With Sari we started to plan this journey late Spring this year, which was obviously too late, since the Park was almost fully booked at that time. Only camps that were available (at least more than 1 night in a row) were Skukuza for 2 nights and Letaba for 5 nights. The distance of these two is 175km and 6 h drive.

Flying into the Kruger Park

One can reach Kruger Park pretty easily from Johannesburg, either by car (appox 5-6h drive) or like we did, by plane to Skukuza Airport. Because we flew with British Airways from Helsinki via London, we needed to book separate tickets to Skukuza since BA doesn’t have a deal with Airlink, the local carrier. Downside here is that our luggage was not checked to final destination, so we needed to collect our bags in Johannesburg after passport control and then check those in again in the domestic terminal. Not a big fuss, everything went very smooth, but from the convenience point of view that’s not ideal. Other thing is that Airlink has 2 daily services from Jozi to Skukuza, morning and afternoon. Theoretically, arriving early morning, should let you enough time to catch the morning flight to Park, but if there should be any delay on Intercontinental flights, then you might miss the following flight. So, we wanted to play safe and booked the afternoon flight to Kruger having more transfer time, which we spend pretty comfy in the lounge.

Airlink flies modern jets, although smaller ones than majority of, say European or US airlines widely use. Only special thing to consider is that carry-on luggage should be a soft case, because the overhand lockers are physically tinier than in larger aircraft. I had my F-Stop Lotus camera backbag, which is the size of allowed hand luggage (well almost ? ) but there was no way of placing it in the overhead compartment. The flight time is only 50-60 minutes, so not a problem to have it under the seat in front of me. During the flight there was snacks and refreshment available.

Skukuza Airport terminal building must be one of the most beautiful and sweet terminals there is. Walking distance from the aircraft to terminal was 25 m, and after 10 m inside there is Conservations fee desk, from that 10 m car rental, but there is also cafeteria and souvenirs shop. At first, we headed to Avis car rental desk to pick up the car, because you need to have your plate number for the Park authorities and enter permit. Very friendly servant helped us to fill-in the Park’s form with vehicle info. Then to Conservation desk, which was a quick stop, cos we have a Wild Card – South Africa’s National Parks entrance card. Then we walked towards exit and noticed that baggage claim was literally outside, next to parking lot.   Beautiful and easy.

I had rented a Nissan 4×4 automatic vehicle and after finding the steering wheel we were ready to hit the road. Must say that I was a bit nervous driving from the right front seat, but pretty soon got used to it. And the Park is quite good place to practice, because speeds are low. Actually speed limit within the Park is 50 km/h on tar roads and 40 km/h on dirt roads. (and many time especially on dirt roads that was much too much, because of the condition of the road). Skukuza Airport is some 6 km away from the Skukuza Camp, so at first we went to check-in to our accommodation, and shop some groceries and water. We had about 2 hours time for our evening drive, so off we went. Camp gates closing at 5:30PM (meaning everyone need to be in the camp prior that time) we didn’t drove too far, but saw first elephants, impalas among others animals. Ellies also showed us that they are good at making a traffic jam 500 m away from the camp gate. If a heard of elephants decide that they block the road by feeding next to it, there is no option to try push through or by.  It might even be very dangerous, but of course animals have always right of  way in the Park. After 10 minutes waiting the ellies stepped deeper in the bush so that we, and maybe 20 other vehicles were able drive safely pass and to Camp gate.

The camp restaurant is superb, located very next Sabie River, nice deck overlooking to the river. I had made table reservation for us and also asked if they can cater vegetarians (Sari is). Our table was ready and the menu was fine, lots of options, mainly meat or chicken, but also vegetarian options available. Wine list wasn’t too long, but enough for us, always wanting to have some local wine. Service is nice and friendly, probably a bit sluggish to our standards, which doesn’t make any harm. Unless you have travelled more than 1.5 days without a real sleep ? But we got our stomachs full and finally the bill. Then back to our hut in the total darkness using a torch to find the right unit. Didn’t need to wait the sleep to come.

All our days in the Park followed more or less the same pattern. Alert went off at 5:30AM and at latest 6:15 we were in the car and out from the camp. The Camp gates are open from sun rise to sunset, so basically from 6 am to 6 pm. We had a loose plan of the direction on each day. It is not possible to make strict plans (or of course you can, but its tough to stick to those) because you never know what comes up the next corner.  Many days we left camp without any breakfast and then headed to some other camp’s restaurant for b-fast. The camps are located so that travelling from a camp to another takes some 3-5 hours, depending on which route you take, and how long you spend on a sighting and how many photographs you take. Usually our breakfast time was 10:30 AM no matter where we ate it. Around noon are the most hottest and bright hours, so there is no rush and we enjoyed the views from the camps as well as tasty meals. Often popped in the curio shop, too.

Then after relaxing a bit, we moved on, normally took some other road back to ‘home’. Near every camp’s reception there is a Sightings Board where people can tag the big5+cheetah on the road map. (even if nowadays rhinos are not mentioned due the poachers. ). It is always interesting to check before heading to road. There is also a Moblie App called Latest Sightings for this same purpose. In the Southern part of the park where there is more visitors and more dense big cat population a good way to spot animals is method called Spot-the-Spotter. If you see from a distance that there is a couple/ a few/ more vehicles forming a traffic jam, there is a cat. Or something very special going on. It is some how funny how much people are after cats and especially lions. If you ask at the breakfast table someone, well what did you see during morning drive? you probably  get:  nah, nothing  much. Meaning they haven’t seen a lion or leopard. We also noticed that we fell to this once evening drive at the camp gate road. Me saying it was a slow (in terms of game) drive. Sari at first said well yes… but we saw smaller birds, plenty of birds of prey, buffalos, ellies, different antelopes, hippos, crocks, giraffes, ostriches, hyenas and a jackal – so really?! was it slow after all?! We enjoy seeing any animals but or course the cats are seldom seen, which makes them special matter. We managed to see 5.5 lions during our week in the park. ( Sari spotted one that I couldn’t see, so its 6 for her and 5 for me ? ) and out of these 4 we found by our own and only one by S-the-S method. Pretty good for novices.

Many Kruger Park’s restaurants belong to some chain that might have restaurants also outside of the park. In Letaba camp there is Tindlovu branded restaurant. I had emailed some general eamil address to the chain (because didnt find Letaba’s address) asking a table for 2 per 5 nights and could they serve some vegetarian food, too. I had almost forgotten the whole thing when after a month I got reply from Mr Mandla telling us welcome to his restaurant and yes they can cook vegetarian lasagne. Again our table was ready (the best spot in the middle and a table with a view) and very friendly lady called Brilliance, took our order. Sari got her meal, which was very delicious and Mandla also stopped by to asked if everything is ok. Perfect we replied both! We appreciated very much their effort on making Sari’s meal. And besides that, as Italian food geeks, we really enjoyed the meals and favours the chef had made. We were happy have Brilliance serving our table 4 evenings out of 5. She even switched her morning shift to an evening one to “take care of my people” – meaning us. I think that is highest compliment we could get.

Be prepared for long days and many kilometres.

Both of those will bring you unforgettable memories.  We drove 1125 km in a week, meaning 9 to 11 hours days out in the bush. Every camps has a petrol station so it is easy to fill up the tank whenever we needed to. I never let the tank less than half, because you never know. This is Africa after all ?

Should you have any question or thoughts about travelling to Kruger Park, please don’t hesitate to comment below, or toss me an email. I’m happy to help if I just somehow can.