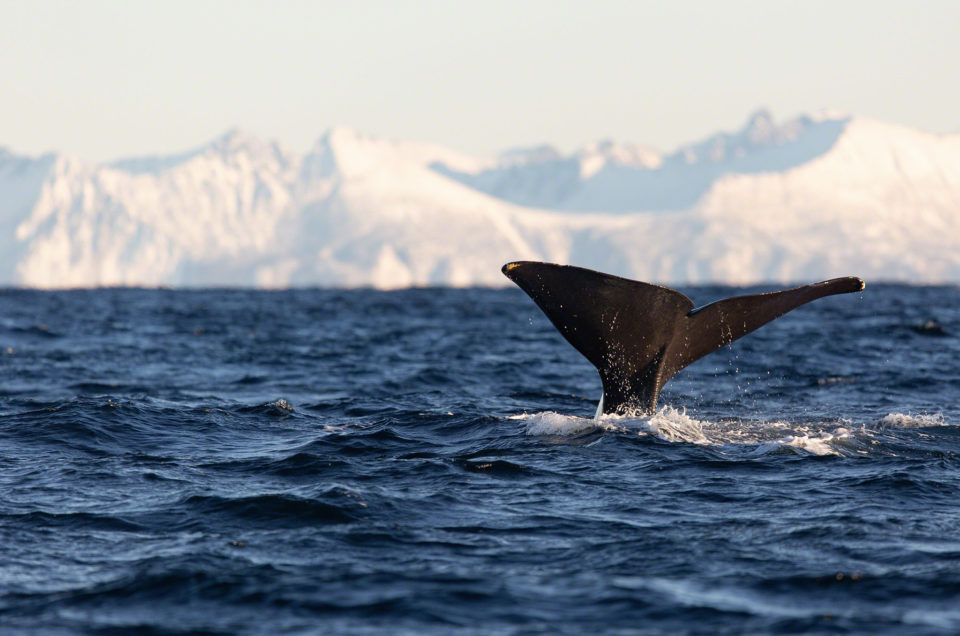 A bit over than a year ago we were in Canada and US Alaska and were able to do whale safaris. In Vancouver we saw orcas  and in Juneau we did a humpback whale tour. Since then I have had a diving humpback image as a lock screen in my desktop. One time while I was waiting for the PC to boot, I said more to myself ” It would be great to go whale watching again”. Sari happened to hear my comment and she said that one is able to see those also in northern Norway! After a week from that reply we had booked flights, hotel and whale safaris for 6 days in Andenes, Norway.

Choosing Andenes as our location

I was in contact with Marten Bril, (owner, skipper, photographer of Sea Safari Andenes) and we discussed about the best time to meet especially orcas and humpback in Andenes area. He told that most likely they are around until mid/later February, depending on how the herring moves. So basically if no herring, then no orcas or humpbacks, but luckily they have as resident spearm whales. I considered also late January, but because of polar night the sun is below the horizon. ( although, if the sky is clear, than there is amazing colours in the sky) but then we chose a week that ends on 17th of February because of more daylight. Sea Safari Andenes uses RIB boats on their tours, so as photography wise, getting near water surface and low shooting angle means nice reflections and ability to get the tail and sky in the same frame is great.

We took flights with SAS from Helsinki via Stockholm and Tromso to Andenes. Last 30 min leg from Tromso is operated by Wideroe with small’sih Dash aircrafts. It was cozy atmosphere, it seemed that almost every passenger knew the flight crew, so obviously they are so called frequent flyers. Some 30 seats in total and and 2/3 were in use. We arrived in Andenes Friday evening around 6pm and took the taxi to hotel. Which, actually was only 1.3 km’s away from the terminal. So not a large town, and neither too busy. If we saw 5 people during the drive that must be all. Once at the hotel we were greeted very nice and friendly staff lady, whom was surprised that it was 2 person coming to stay. There was some tiny mistake in their system and they had booked us a single room. I didnt panic but checked my confirmation quickly to see that I had booked a double 🙂 The hotel was full, so she needed to make the single to double, which she managed to do in a really decent time.
We headed out for dinner behind the corner in restaurant Arresten, which was great!

First whale day was a mixed one 🙂

Next morning we were up early for breakfast, and happy with the weather, sunny and totally blue skies. Just when we thought that this is going to be a perfect day out on the sea, my mobile rang. Lill from Sea Safari called that unfortunately they need to cancel the safari due too heavy wind. Holy smokes, for a second that was unbelievable moment, but we knew that in Andenes there is also an other company doing safaris with larger vessel, maybe they go out. I tried to call them, but only got the machine saying that office hours are from 09 until afternoon ( the time when I called was 10:30am ) Sari checked their website to find out they sail out every day at 11am. So we decided to rush to the harbour to see if they have room for us. While we were dressing Lill called again telling that the cancellation is cancelled: there are whales closer to town where the wind would not be a problem and asked us arrive to the port as soon as possible. After 10 minutes 2 happiest whale watchers they have ever seen popped in their nice office building.

We waited for a couple of minutes for the rest of the watchers to arrive, then jumped in the thermal/ floatation suits, got life vests and off we sailed. (With the help of two 250 horsepower 4 stroke outboard Mercury motors) Sari wants to note that she had 4 layers of clothes under the floatation suit, and none of those was too much 🙂 Also do wear very warm boots with woollen socks, because your feet are going to be cold anyway. In the harbour we spotted 4 eagles among other birds and few seals, too. After some 20 minutes our skipper Jeremy noticed the first water spray and he carefully manoeuvred the rib so that the whale would not be disturbed and we would have great views to this magnificent creature. It turned out to be a spearm whale, catching breath 5-10 minutes on surface in between the dives that last around 20-30 minutes in this spot. The water there was pretty shallow, “only 150 meter” so they dont usually do longer dives. Skipper was well aware then the whale was about to dive and told us take cameras ready. There is something magical and majestic that i just can’t explain then whale dives and shows its tail high up in the air. Managed to get a few nice shots, although must say that focusing in such unstable small boat rolling on waves is …, well challenging 😉 Sari had my other camera and she took amazing landscape pictures (with a whale in the scenery) After 4 dives and the waiting in between, it was time to sail back to harbor. And even if we thought we had many layers of warm clothes it started to get a bit chilly out in the wind. Lill had us covered and she had hot, tasty vegetable soup and coffee waiting for us.

Back to hotel, image backups and blog updates, a nap and to dinner .

The weather starts to change

Sunday morning weather was totally grey, clouds hanging low, little snow in the air, but the wind wasnt too bad. We had booked morning safari starting at 9 am and after arriving to port, we now already knew to procedure, so we were again able to get the front row seats in the RIB-boat. Which is actually very handy when shooting a long lens like 400mm/4f, so you dont tackle other passengers with the lens hood. But everything has its price. When there are some bigger waves, you get salty sea water on your lap and gear, and when driving cruising speed rain/snow is hitting pretty bad to your eyes and face. I think that still ability to shoot almost 180 degrees in the front sector overdoes this small discomfort. Next time I will bring some protecting glasses with me wear those during cruising.
Sea Safari Andenes had two RIB’s out at the same time, and that doubles the eyes searching for the whales. Because if one boat finds while, they have radio to call the other. But still after +3 hrs of intense searching and driving around, we had not a sight of the whales. Waves were also getting higher, so spotting the water sprays got difficult. A bit dissapointed we head back ashore. Lill was greeting us with a smile asking if we saw nothing, so I replied with a joke ” no, absolutely nothing, and now we want our money back !” and winked my eye to her. We almost got our floatation suits off, when she approached us telling that in the next departure in 15 minutes, there are 2 spots available, if we’d like to… YES! we said even before she finished the sentence. Had a quick cup of coffee and a bowl of soup and back to boats.

This time we took the heading westbound, the sea was bit rougher and waves higher, but here the skipper could hear the whales over hydrophone. We took a couple of listening stops and finally he told us that now whales are near, just keep the eyes open. Weather was still totally grey, occasional rain and snow combined with high waves didnt make spotting easy at all. But again more eyes, better luck and soon we found it. The whale wasnt in the mood of his images taken, and dived without high tailing. So the searching started again. After 15-20 minutes someone noticed water spray rather long distance to us, but we were able to drive closer in time to see it and shoot the dive. We were long out in the sea, so we started our journey back towards to port. It would have had been a real joyride, fullspeed cruising up and down the waves, but those needles (water/snow) hitting to our faces, kinda reduced the joy. It was great to have a warm soup and feel the face again 🙂

The story continues after the image block 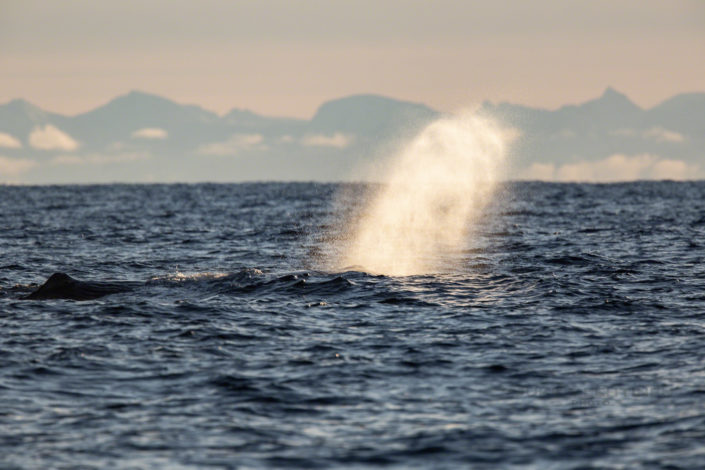 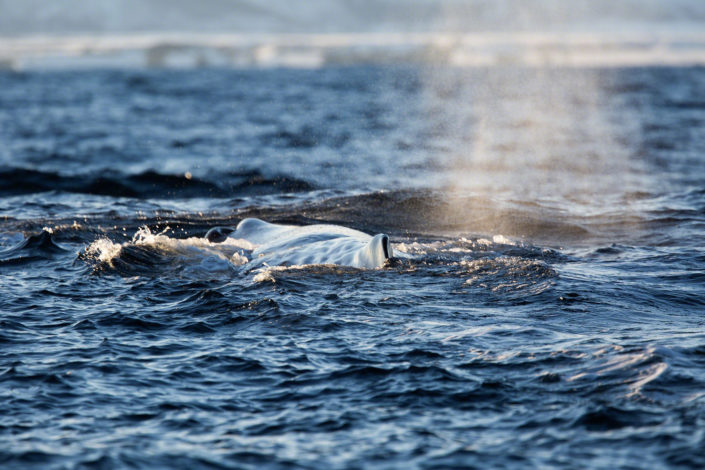 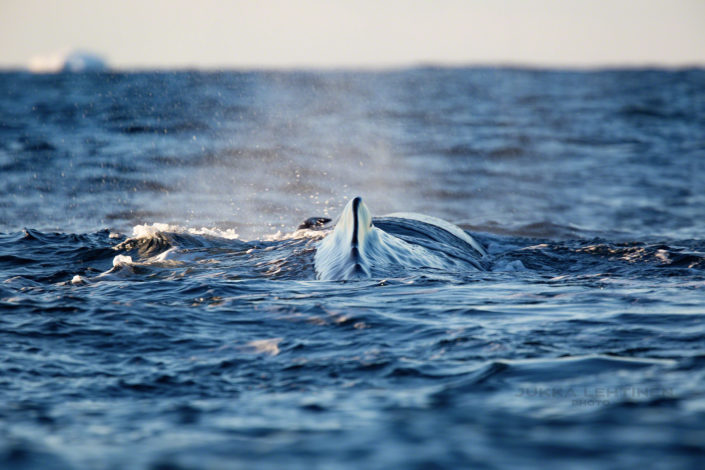 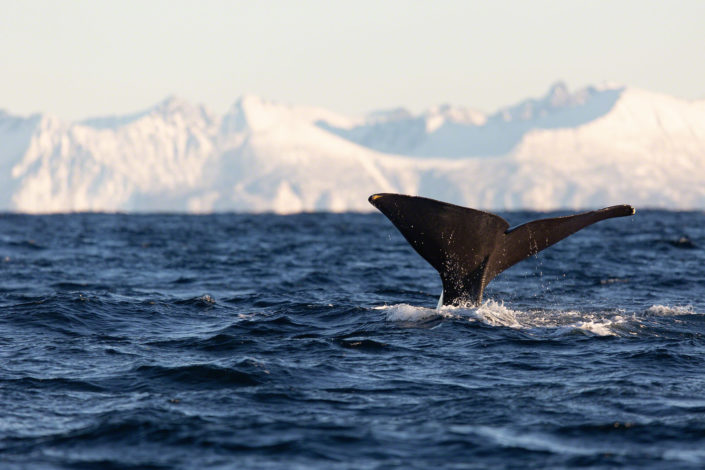 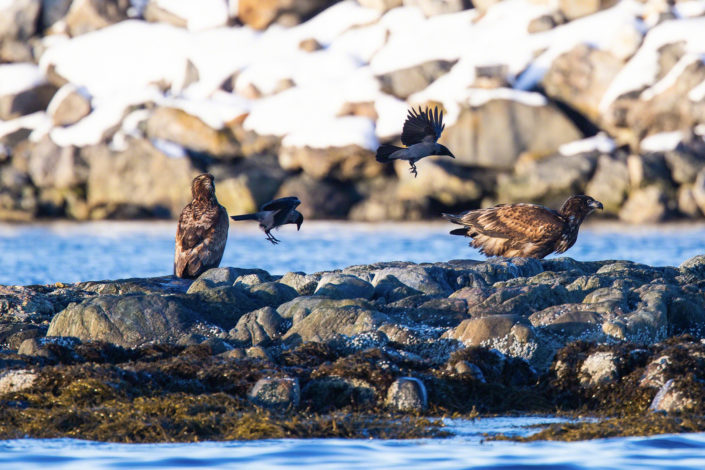 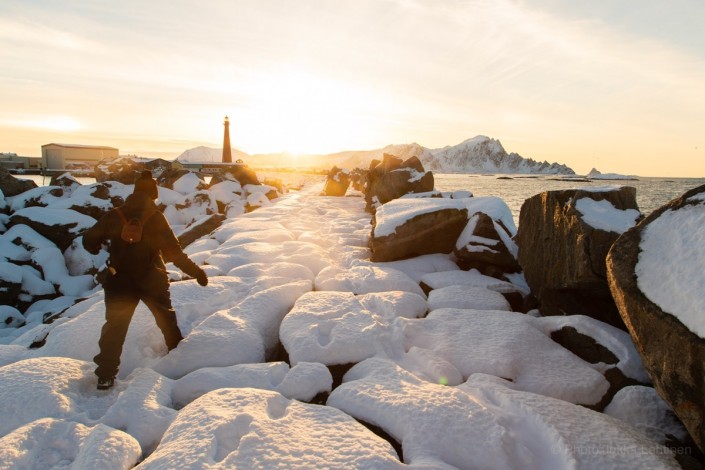 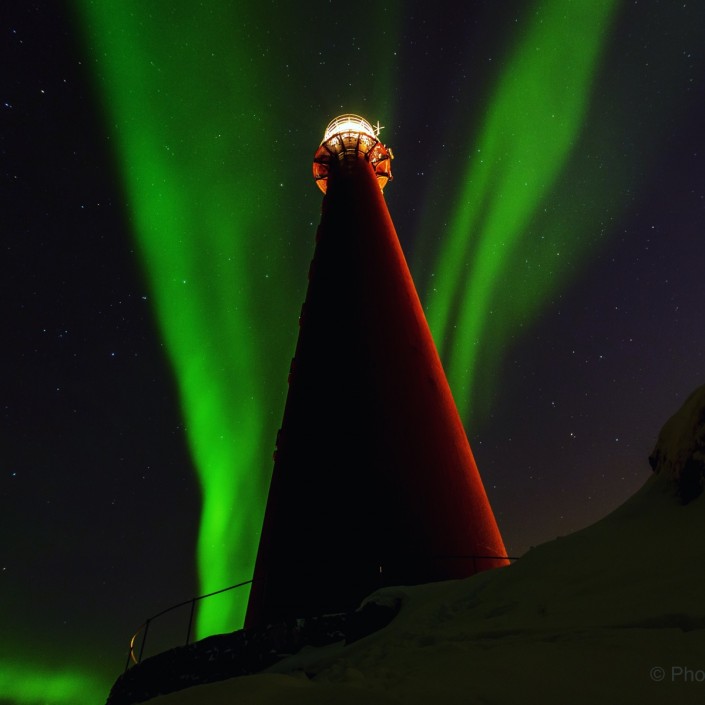 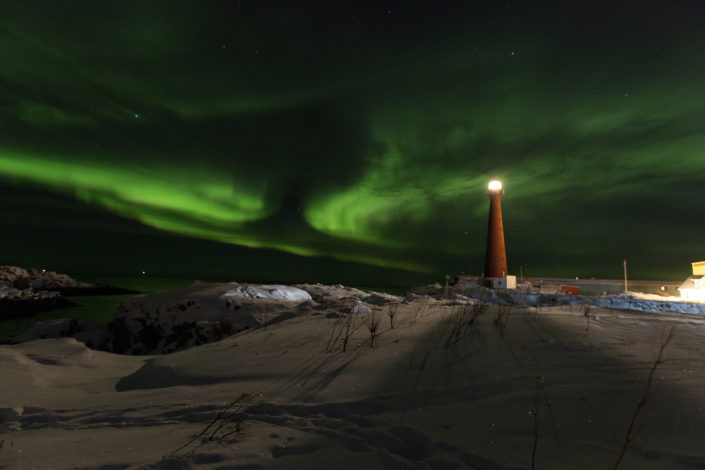 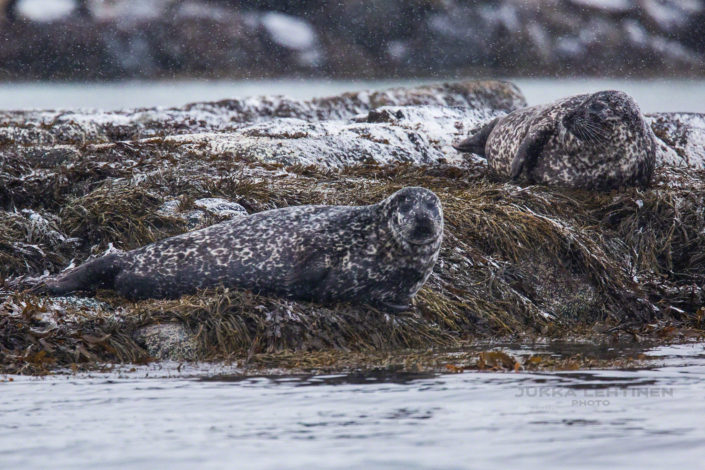 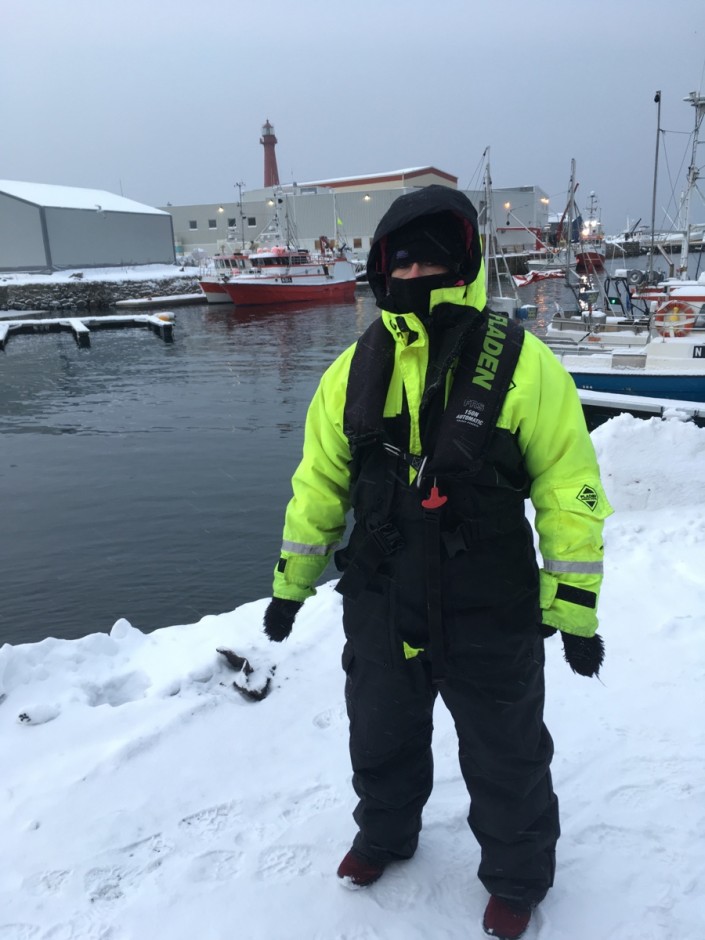 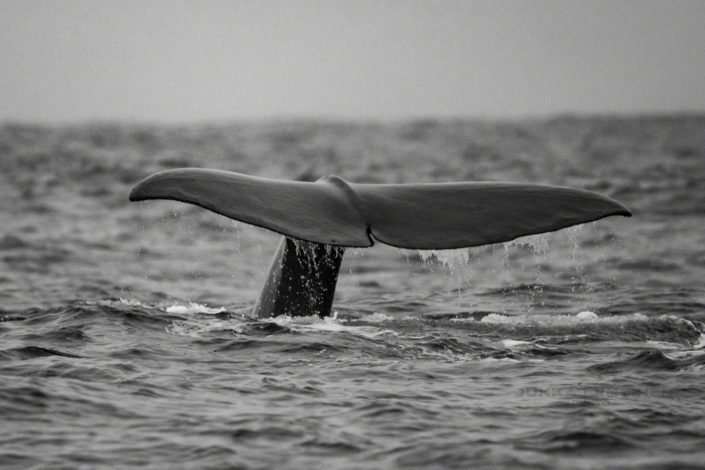 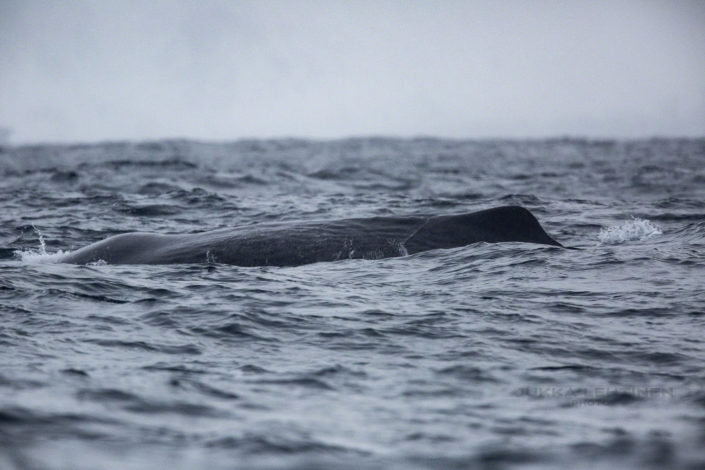 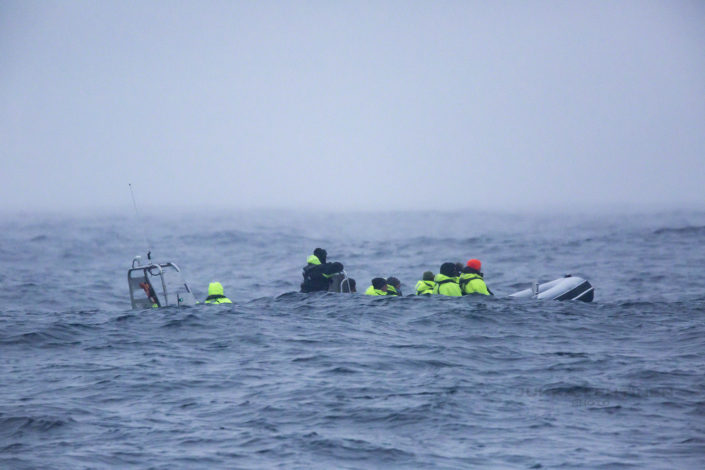 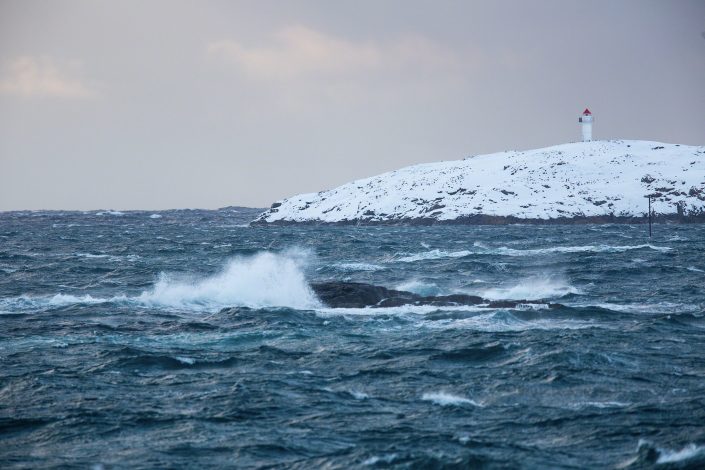 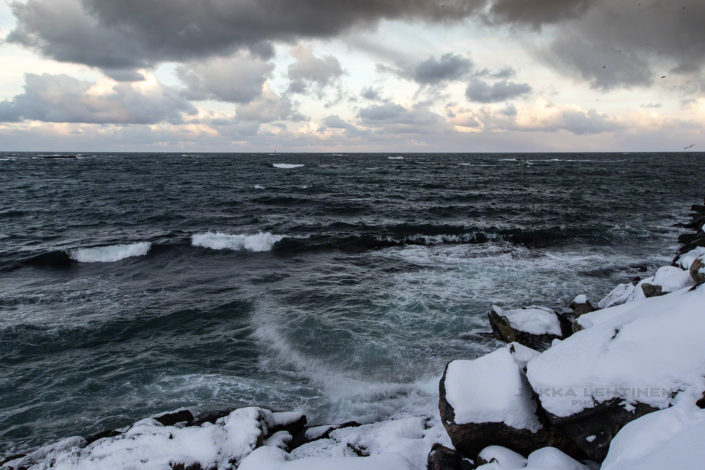 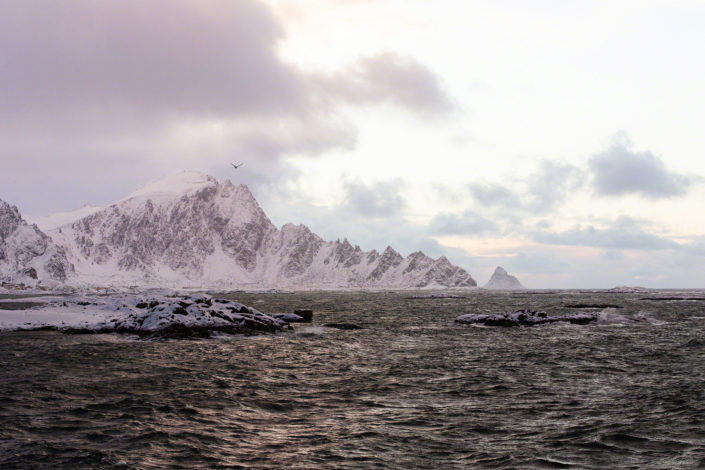 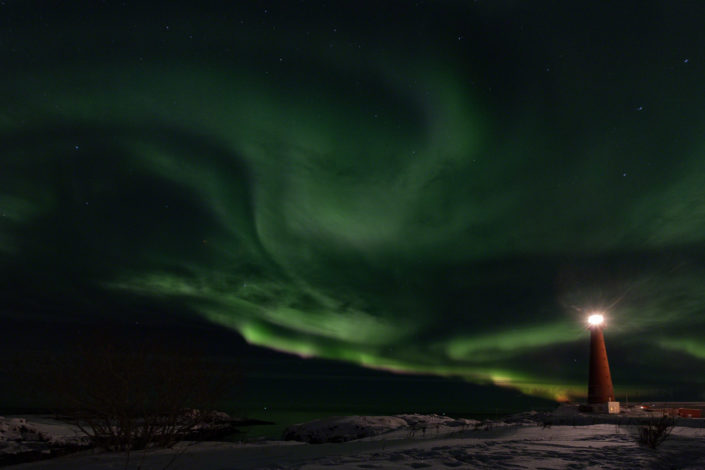 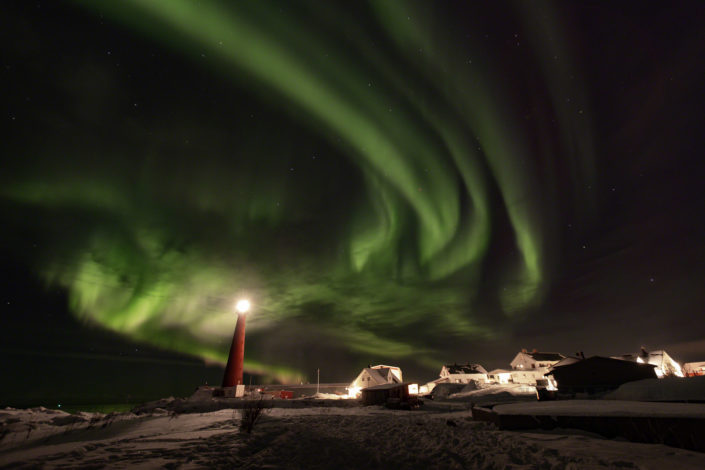 Plans are made to be readjusted

We had already looked at the weather forecast and noticed that it surely didnt look that good out. A polar low was about to hit the area of Lofoten and Andenes and there was give a gale warning, meaning that winds can reach near storm and waves even 4 meters high. So we understood when Marten told us that the next day (Monday) trip is cancelled. On Monday I spoke with Lill on the phone and she told that also Tuesday is cancelled due the heavy winds, and probably even Wednesday, too. On Thursday, which was supposed to be our last safari day the forecast told heavy rain and pretty heavy wind.
We went out for a walk, made the whole town tour by foot, and it took us less than an hour. Then we realized we need to make the tough decision: book new flights, cancel the rest of hotel days and safaris. We felt pretty miserable when we walked to Marten at Sea safari and told that we will give up, and fly home. He looked at us, and told that it is a wise and really good decision in the terms of current forecasts. It helped a bit, but of course we felt a bit disappointed.

So our one week whale safari shrank to a bit longer than a weekend, but this is nature we are dealing with. We are definitely happy what we managed to experience and see, we had 2 days out, one perfect sunny day, and the other one that showed us already a bit that you dont want to mess with nature and sea: it will win everytime. I am sure that one day or year we will be back, hopefully with more whales and “better” weather, so until next time Norway! 🙂